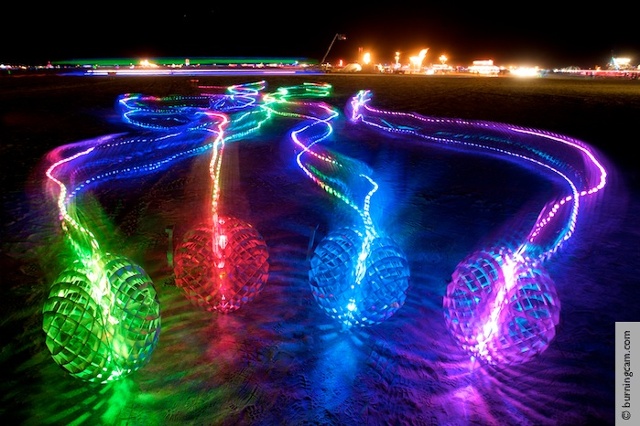 I am an artist member of SWARM. SWARM is a kinetic art work of semi-autonomous spherical robots ("Orbs"). Each robot has a shell 30 inches in diameter, with batteries, motors, audio system and color LED illumination inside. The SWARM is under the command of an on-board computer with wireless connectivity to other orbs and a central computer.

SWARM is built to explore the aesthetic possibilities in the emergent behavior of artificial systems. As a first step, Orbs are remote-controlled by human operators, but each Orb's sounds and color illumination is algorithmically generated in response to location and motion. Each Orb has sophisticated navigational sensors including GPS, accelerometers, and rate gyros. We are progressing towards sophisticated navigational algorithms, much like those used in spacecraft, that allow each orb to determine its location with high accuracy. From this, we can explore emergent and cooperative behavior like flocking as well as new possibilities in machine choreography. SWARM is not a simulation. SWARM is a platform for art of the 21st century.