Archive > A Life of Its Own 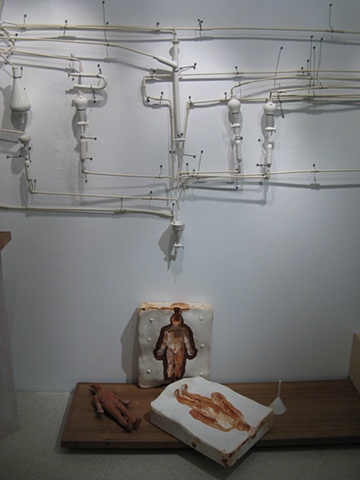 A Life of Its Own
Hand-made labware, slip, slipcast mold of visible man
< previous next >

Recently I have been contemplating glass jugs of cell cultures and transgenic organisms in petri dishes. After reading the 'Immortal Life of Henrietta Lacks,'(the story of a dead woman's cancer cells and their role in curing many diseases) I thought about the bio-political ramifications of these cultures, ownership of them, their rights, our responsibilities to them, and their impact on our ecology and psychology.

In many creation stories, humans were given life from clay, mud and magic or divine intervention. In Egyptian myth, gods Atum and Amun breathed life into clay bodies, giving rise to humanity. In other cultures, first people are alchemically made from a god's blood mixed with dust or clay. According to Jewish legend, a golem was a human-shaped lump of clay brought to life by a magic word or symbols (perhaps like the A, T, C and G used to describe the code of life). Usually the golem functioned like a robot and could perform simple tasks. However, in some tales, the golem became a violent monster that could not be controlled, even by its creator. The clay body is an automaton, a machine, a technological tool.

Modern synthetic biologists transplant genetic code (either from other organisms or completely fabricated) into cells of another organism. I perceive connections between old means of mass production and the new mass bio-production; vats of cells from a variety of animals (including humans) long dead, whose liver, heart or skin tissues live on to aid in bio-medical research. The trade in these tissue cultures enables genetically identical, semi-living things to inhabit several places at once and to grow to a mass unattainable in the original organism.